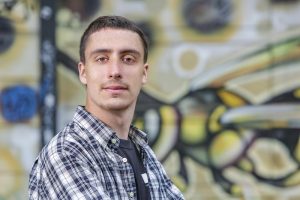 As a child growing up in San Francisco, I was hyper-sensitive to sound and couldn’t listen to music without feeling agitated or overwhelmed.  For years, I avoided music, instead focusing on drawing and writing.

My first true exposure to music didn’t come until I was twelve, during a long road trip with my father during which we listened to almost the entire Beatles catalog in chronological order. I became interested in learning more about them, and to make up for lost time, I immersed myself in music. I sought a way to connect with what I was hearing, and I found it through writing.
I started blogging about music in high school.  My blog, called SF Rebirth, focused on the all-ages music scene in the Bay Area. I was also lucky enough to catch the garage-rock scene that flourished in San Francisco at the beginning of this decade. These experiences gave me experience with reporting, reviewing, and interviewing that I would expand upon when I decided to attend the School of Journalism at the University of Oregon. Once there, I got a job with the main student-run campus publication, Emerald Media.  I also hosted my own weekly show on KWVA, the campus radio station.
I’ve interned for two major San Francisco publications: the San Francisco Bay Guardian (where I wrote for the music and arts section) and San Francisco Magazine (where I was an editorial intern). In Eugene I interned at, then freelanced for, Eugene Weekly. I returned to San Francisco from 2017 to 2019 to accept a position as editorial assistant at J.
For the past few months, I have been an intern at the Willamette Week in Portland, Oregon.   In addition to this, I currently review music for the websites Spectrum Culture, Resident Advisor, Split Tooth Media, popmatters, 48 Hills, and Phluff.

I still admire the older, seminal acts I was first introduced to. But my listening and writing of late tend to focus on contemporary and underground acts across a wide range of genres, including but not limited to ambient music, hip hop, R&B, dance music, and pop. I pride myself on my openness to music across multiple genres and time periods as well as to becoming accustomed to cutting-edge trends.

It’s my great hope that my writing will not only entertain and inform my readers, but also turn them on to new artists and genres they might otherwise not have known about, or open their minds to those they may have dismissed or ignored.

What more do you want when the kids run the restaurant?