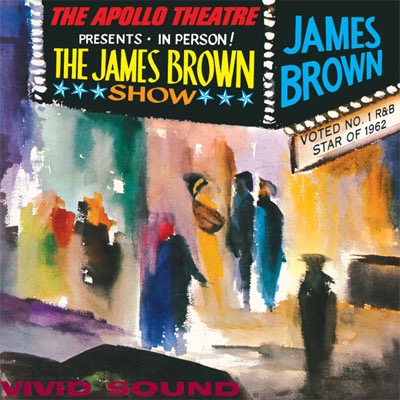 Watching James Brown perform is disturbing. To see him stagger back for the second or third round of please-please-pleases is to watch a man in pain; he’s barely able to stand, his face contorted in a grimace, glistening with beads of sweat. There’s something superhuman about him – how can a human do that for so long? Or make such screams? Some performers make their act look easy. Brown makes it look Sisyphean. There’s a scene in Batman v. Superman where Bruce Wayne does pull-ups with cannonballs strapped to his legs. It’s like that.

Still, listening back to Live At The Apollo – the best live album I’ve ever heard – I wonder why more live shows aren’t like this. There’s none of the self-deprecating veil of shyness that compels rock bands to stare at their feet. Brown doesn’t sit back and hope the music does the job by itself. Everything here, from the comically drawn-out intro to the 12-bar interludes to the little fanfare that plays as they walk out, is engineered to drive the audience to the brink of ecstasy. The band is hot. The setlist is relentless. And Brown…

Well, he’s the greatest frontman of all time. What a ham he is, and how he delights in putting on the best show anyone in the crowd will probably ever see. Listen to how he opens “Lost Someone.” For a minute or so, he screams ad-libs (“BELIEEEVE ME!”) punctuated by horns and the shrieks of the audience. Then he sings two words, quietly but knowingly, a smile surely in his mind: “I lost…” As he pauses, everyone in the audience realizes what’s happening simultaneously. It hits them like a train. And just as Brown completes the sentence and the song begins, the cheers swell to the heavens. Can you even fucking imagine being there?

“Lost Someone” is ten minutes long and takes up more than a third of the album. It’s a testament to just how much content is on this thing that he can treat himself to such a indulgence and still end up with such a lean, exciting set. Songs were shorter then, and most of the ones he speeds through are three minutes or under, arranged in a rough pattern – slow, fast, slow, fast. No “slow sections” or “fast sections,” no soporific middle to give the audience a break. On the slow songs (“Lost Someone,” “Try Me,” “I Don’t Mind,”) he bleeds emotion. On the faster songs, he disappears into the din, presumably dancing like crazy.

He knew he had to make the show good. His label worried a live album consisting entirely of previously-released material wouldn’t sell, but Brown – having played the Apollo before and knowing how crowds there responded to his act – paid for it himself. It sold millions, of course. The recording is as pristine as any studio-sponsored live album except for the inconsistency of the volume of Brown’s voice. We can hear when he steps away from the mic, especially for one stretch towards the middle of “Lost Someone” where he’s probably on the floor. Knowing what Brown’s show looks like and visualizing it as you listen to Live At The Apollo is part of the fun.

Another nifty thing about Live At The Apollo is how you can pick up on little affectations shows don’t really have anymore. Wild, MC’d show intros like the one here (or the one immortalized in Almost Famous) seem to have vanished; these days the stagehands just dim the lights and we assume the people walking on are the band. Another interesting thing that happens is that three times on the album the band plays an identical twelve-bar blues motif in between songs. Was this a common practice back then? It certainly adds to the excitement.

I recommend all bands intending to perform live, regardless of genre, listen to Live At The Apollo. It’s a master class in setlist sequencing as well as in how to make an audience piss itself with pleasure. It’s helped me grow as a performer. Sometimes I’m disappointed to find my band’s been booked for half an hour and wonder how I’m going to fit all the songs I want to play into that time. Then I remember Live At The Apollo is only half an hour and he still had time to ad-lib for ten minutes. It doesn’t always work out that well. But then again, I’m not James Brown. None of us can ever be.