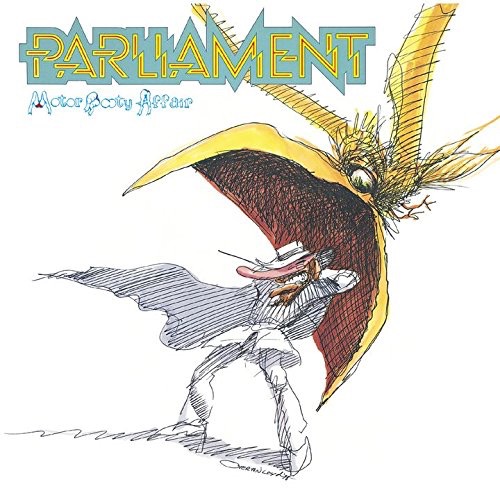 I’ve decided to start regularly posting reviews of albums I consider among my favorites, seeing as most of the sites I write and have written for emphasize timeliness. I’ve written a few retrospective reviews for Spectrum Culture on albums like Prince’s Black Album and Biosphere’s Substrata, but the opportunity to do so doesn’t come around much. These reviews come out of bursts of love and inspiration. This is my first one, of Parliament’s Motor-Booty Affair.

“This fish tale begins where most fish tails end.”

George Clinton is a funny motherfucker. It’s hard to imagine anyone in pop better at absurd one-liners (“lemme slide a yard of tongue down your throat!”). At sneaking dirty shit into songs that (sometimes) have a good chance of slipping past a censor, he rivals Sondheim or Porter. Hearing a song like “Mr. Wiggles” for the first time, you might laugh at the outlandishness of Wiggles the Worm and his ladies Giggle and Squirm as you snap along to the steady, teasing groove. Then you listen again, and the sheer complexity of the humor is enough to overwhelm.

“Leave your nose at home,” he says. This makes sense given the song’s underwater theme, but if you heard Funkentelechy vs. The Placebo Syndrome, you were introduced to Sir Nose D Voidoffunk, enemy of all that is good and funky in this universe. So if there’s no Nose underwater, everything is good and funky. Clever. But then, sure enough, the dog in Clinton comes out: “You might want to rent a blowhole.” Fuck.

Motor-Booty Affair is an absolute joy to listen to. It might not get the party moving like Funkentelechy, and in fact it’s almost dainty at times (“Liquid Sunshine” almost sounds like something MGMT might have written), but this is the peak of Clinton’s gift as both worldbuilder and humorist. They go hand in hand. Here’s the guest list for the party on the title track: Queen Freakalene, Howard Codsell, we got Charlie Tuna over there, and – “wait a minute! wait a minute! There goes Moby Dick! Yes, he’s running after Octopussy!”

The record’s theme, steeped in underwater mythology, gives Clinton carte blanche to make as many fish jokes as he can fit into 45 minutes (and dust off some of the classics, like “you can tune a piano, but you can’t tuna fish”). But he also plays with a more traditional connotation of water on “Aquaboogie (A Psychoalphadiscobetabioaquadoloop),” where Sir Nose gets his baptism. “Put me down! I don’t like water!” he protests, as the groove swims beneath him. But after a few minutes, he’s splashing around with the other fishes. “Feels good! Feels good!” he bleats. All he needed was a little push to get his funk on. It’s heartwarming.

The final track, “Deep,” features some oddly incongruous racist babble (“there’s niggers in the neighborhood, and I had to hire a spy”), followed by a Monty Python and the Holy Grail-style fourth-wall party shutdown. I’ve had a hard time parsing how this fits into the music, but I have a theory. Recall the Mothership album and tour, which framed the spaceship from which Clinton descended as the “sweet chariot” come to deliver black people to a plane beyond suffering. Perhaps Clinton took inspiration in the mythos of Atlantis and framed it as a place where bigotry is as obsolete as noses – where you can dance underwater and not get wet.