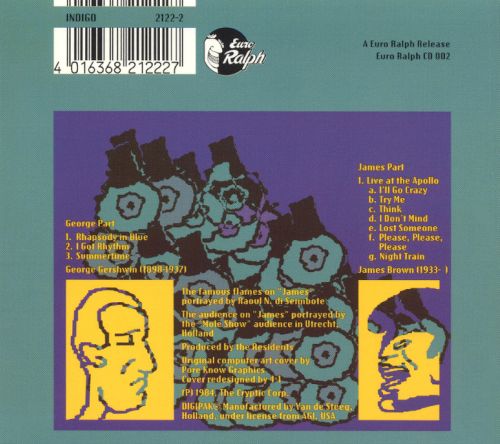 The joke on George and James isn’t how bad or clichéd or ridiculous the Residents think James Brown’s Live at the Apollo is but how good it knows it is. It assumes you understand what a herculean zenith of showmanship, sequencing, singing, and songwriting that record is. Then it turns down the power. The crowd is suspended in space. James Brown is an arthritic robot. The Famous Flames are squabbling birds. Chords that should be major sour distressingly into minor. The horns are what you hear when your dryer is done. Handclaps are as wet and disgusting as the slap of a dead fish. The playing would get the real-life musicians fined bankrupt, and even Brown has trouble remembering the title of “Night Train.” That the backing vocals are left intact on “I Don’t Mind” is a joke in itself: they’re so beautiful and come as such a surprise we have to chuckle. The more you know about Live at the Apollo, the better George and James is, and Apollo is an album I recommend anyone who performs music in front of audiences listen to as much as possible. I know a lot less about Gershwin than Live at the Apollo, so I’m not entirely sure where the gags are, but opening “Rhapsody in Blue” with an air-raid siren is pretty great.