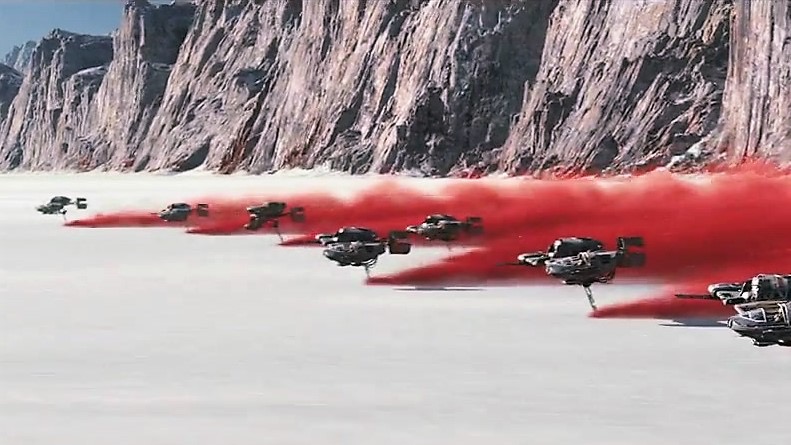 The Last Jedi was pretty much what I imagined it’d be, except better. I anticipated it’d start out kind of like The Empire Strikes Back, then go off the rails. I was right—though to be fair I knew it had its share of twists and turns from the headlines of the reviews that’ve come out thus far.

The reviews don’t reveal anything more, of course. Most writing on the film so far has been a drag to read, not because of any lack of talent on the part of the writers but because Lucasfilm goes through great pains to avoid leaking spoilers, meaning the film can’t really be discussed with the detail it deserves at this stage. I’m in the minority among pop-media consumers in that I couldn’t give less of a shit about spoilers, and I usually read the Wiki plot summary before a film I want to see comes out. A death doesn’t move me any less if I know it’s coming. Luckily the Wiki summary for The Last Jedi took longer to emerge than I anticipated, and I was able to hold off reading it long enough to go into the film (relatively) blind.

The first half hour or so of the film is in the fashion of Empire. “The First Order reigns,” the first line of the deliciously written opening crawl tells us, and as the film starts the ersatz Empire is slowly picking off the Rebel fleet, which is forced to retreat. Meanwhile, our Jedi-in-the-rough Rey (Daisy Ridley) travels to Luke Skywalker’s hermetic island to seek training, which she receives only after a long game of psychological tug-of-war with the master. Rey even travels to a cave where she sees her warped reflection, like Luke when he did battle with himself deep in the Dagobah swamp back in 1980. So far, so Empire.

Then things get nuts. Fast. Rey establishes a mind-meld with Kylo Ren (Adam Driver), the petulant face of the dark side of the Force. Their first contact is clearly orgasmic. They pant, faces pointed upward, skin glistening, struggling to break the ice like awkward lovers on a first date. Rey resists as convincingly as Ginger sliding away from Fred. By the end of the movie they’re cutting down a roomful of highly trained guards together, and it’s staged like a ballroom dance—her in white, him in black, against a backdrop of blood red.

The training continues. Director Rian Johnson’s auteurism shines in an astonishing montage where Rey finds within herself the nature of the Force and how it binds all things. “What is the Force?” she asks, and the movie sidesteps the irritating problem of midichlorians for the metaphysical nonsense we expect and want from a Jedi master. Perhaps Luke never learned about midichlorians; he keeps a few Jedi texts on his island, but it’s implied he never read them.

These scenes are intercut with the pathetic flight of the Rebels from a perpetually looming First Order fleet that slowly picks off the good guys ship by ship. As in Rogue One, which this film resembles more than The Force Awakens, we see the struggles of the individual rebels in the battle machine—a chubby pilot who dies a fiery death, a young woman who sacrifices herself to deploy a shipload of bombs, an avuncular cetacean creature that gradually becomes one of the film’s most recognizable faces. We meet some new characters, namely the bomber’s grieving sister Rose (Kelly Marie Tran) and an admiral played by Laura Dern who’s the film’s best supporting character. I like characters who we think are assholes because they’re at odds with the hero but end up being the best people in the whole damn movie. Lady Eboshi. Snape. And Admiral Holdo, who initially plays to our instinctive dislike of authoritarianism but never says anything we can really disagree with and finally sacrifices herself in an explosive scene of heroism that seems inspired by samurai anime.

This is all good stuff, though the chase seems to reuse some of the same shots of the giant First Order flagship shooting down Rebel vessels. One scene that rubbed me wrong was a detour to an alien casino to pick up a codebreaker (Benicio Del Toro, channeling Jack Sparrow with his drunken hand gestures) who just ends up betraying our heroes and being useless to the movie. The casino itself is a wealth of wonders, with all sorts of high-class aliens drinking and gambling in an establishment disturbingly stoked by animal abuse and child labor. That leads to a prequelesque scene with Rose and John Boyega’s Finn galloping on the backs of giant rabbit-horse hybrids that are more cloyingly cute than the notorious porgs. This and a corny ending scene could have been sacrificed to trim the movie down from a 153-minute runtime that primarily serves to let you know how ambitious it is.

Ambitious it is indeed. But it never loses track of the plot, never confuses us with metaphysics. There are plenty of plot holes to nitpick, but that’s essentially moot with childish space-opera like Star Wars. If it took itself seriously, we’d be back in the realm of Attack of the Clones—whose romantic subplot of Hallmark platitudes seems even more anemic compared to the wordless heat between Rey and Ren. The emotional stakes are high. But even when Luke and Kylo Ren face down for the inevitable duel, it’s played as much for tears as for thrills. Those put off by the slick ballet of lightsaber battles in latter-day Star Wars films will appreciate the high stakes of this climactic fight, where every clash of weaponized energy is charged with the weight of the characters’ history.

The Star Wars universe is beginning to seem endless, augmenting its original goal of three trilogies with spin-off films and apparently a new trilogy to be directed by Johnson sometime in the future. But I’m glad Star Wars films are around, because—along with the Marvel Cinematic Universe, which has a studio saminess Star Wars lacks—they’re such a refreshing antidote to the self-seriousness of so many blockbusters. Seeing the Lucasfilm logo and the immortal words “a long time ago in a galaxy far, far away” before hurtling headfirst into oblivion with the opening crawl is still such a thrill. John Williams’ score is playful and effective, his horns and strings dancing merrily with delight during the action scenes but souring into dissonant shrieks when the dark side of the Force rears its head. The eccentric fades between individual scenes might have been corny sometime in the past but aren’t anymore, simply because that’s just not something you see in movies very often.

These are ideas from the director-driven New Hollywood that spawned Star Wars (and which Star Wars effectively killed as film companies tried to replicate its success rather than its vision). Disney would no doubt scoff at these tricks were they brought to the table by a young, unproven director, and I was reminded that George Lucas resigned from the Director’s Guild of America rather than acquiesce to their demands he start with a more conventional beginning. Star Wars may be a giant corporate swamp-monster, but it’s always been built on the back of massive risks. The Last Jedi knows this.