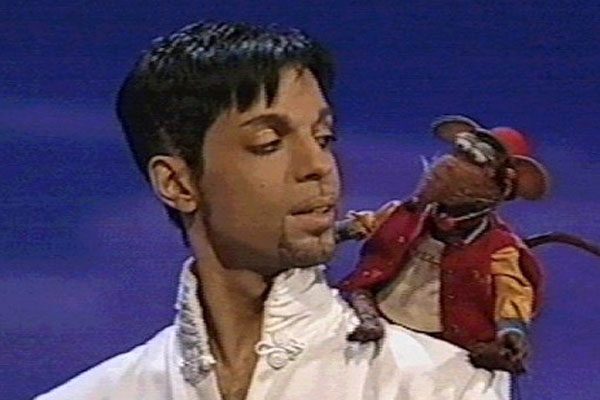 I never thought of “Starfish and Coffee”—that sweet, mysterious song—as a children’s song until I saw Prince perform it on Sesame Street with the Muppets. It makes perfect sense as one: it’s got a simple melody and silly lyrics, and it’s set in a schoolhouse. I guess its psychedelia was the main reason I never saw it that way. I associated it with something as adult as acid rather than as innocent as a nursery rhyme. But I guess all kids’ songs are kind of psychedelic, and all psychedelic songs are kind of childish.

Often explicitly so. The Beatles count three songs written for kids within their discography, all sung by Ringo Starr. The Kinks featured two on Village Green Preservation Society. Pink Floyd’s “Matilda Mother” begins as a fairy tale before, astonishingly, pulling back to reveal it as a story told by a mother to her child. Donovan devoted disc two of A Gift From A Flower To A Garden to kids’ songs, including one called “Starfish on the Toast.” I don’t know if the Rolling Stones ever wrote any kids’ songs, but “She’s a Rainbow” could pass for a lullaby. Count “Starfish and Coffee” in that lineage.

I can’t speak for all these stars, but my personal attraction to psychedelia comes out of an insatiable childhood lust for exploration. One of the defining experiences of my life is finding out just how big the world really was. I still remember the shock of discovering that there were towns further north of Duncans Mills, CA, and avenues in San Francisco past 28th. As a kid, the thing that interested me most about Hogwarts was the multitude of secret doors and corridors.

Maybe that’s why these psychonauts wanted to be kids so bad. Most of the aforementioned artists wrote these songs when they were around 20 to 23, the age when the malaise of growing up really starts to set in. Certainly the rock star life represents a return to this childish freedom, but so could the psychedelic experience, where the logic that governs the world falls away as easily as it does when you’re a kid and, if you think you’ve seen it all, more opens up to explore.

“Starfish and Coffee” nails this experience. We meet Miss Kathleen’s class—first comes Kevin, then comes Lucy, then little Prince, and finally Cynthia Rose with the smile beneath her nose.

Seems like a strange breakfast. Are we talking a literal starfish? What on earth is a butterscotch cloud? Of course Prince and Lucy have to find out. One day when Cynthia’s gone, they open up her lunchbox. “Lucy cried, I almost died—you know what we found?” Back to the chorus.

No explanation is given, but that’s what makes the song so beguiling. There’s an eerie suggestion that Lucy and Prince have stumbled upon another universe that doesn’t play by the rules set by this one. “Set your mind free” could mean drugs. I doubt it. I think this Cynthia character really is on a different plane from the rest of us, and to “free your mind,” as Prince puts it, is as tantalizing a goal as getting into heaven or achieving nirvana or finding the meaning of life. Everyone, in some way or another, wants to break on through to the other side.

And then—and here’s the psychedelic crux of the song—Prince gives us just the faintest suggestion of this other world. As the song fades out, Prince lets a tiny wave of backmasked guitar wash through the stereo field. It’s barely substantial enough to qualify as a solo, but it’s the part in the clouds, the glitch in the Matrix, the twinkle in Chihiro’s hairband. It disappears into the ether, and the real world closes up around it.