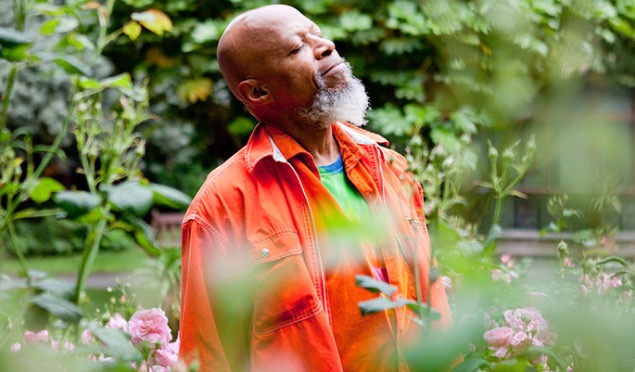 Anyone put off in the least by the term “new age” would do well to check out Laraaji.

The man’s work and philosophy are firmly new age – for decades, the man born Edward Gordon made a living selling tapes to meditation centers and hosting workshops on the power of laughter. His albums have names like Unicorns In Paradise and Connecting With The Inner Healer Through Music, and half of the latter album is a guided meditation where Laraaji intones platitudes in a sonorous bass voice that would make Morgan Freeman jealous. He’s not here to apologize or make compromises.

But Laraaji’s music isn’t the easy-listening pop associated with genre stars like Yanni and Kitaro – the kind of stuff that puts people with edgier tastes off of new age. This is heady, psychedelic shit.

The main difference between new age and ambient, two genres that are often interchangeable, is that new age aims for good vibes. Laraaji’s work is no exception, but he also manages to maintain a psychedelic edge while peddling positivity. His work is calming, but it’s rife with the signifiers of weird psychedelia: ominous drones, cheap organs, and phasers, phasers, phasers. This music has more in common with what noise dudes like Sun Araw (who’s actually remixed Laraaji) are doing than anything you’d expect in the lobby of your local healing centre.

New age is currently undergoing a reevaluation thanks to labels like RVNG Intl. and Light In The Attic, whose I Am The Center compilation did for the genre what Oh Brother, Where Art Thou did for folk. As such, Laraaji’s become a bit of a hero. In 2011, he linked up with Blues Control for a wondrous collaborative joint, simply titled Blues Control & Laraaji, and three of his best meditation tapes were recently reissued by Leaving Records. He’s also got a remix EP out, featuring Sun Araw and other modern experimentalists like Motion Sickness of Time Travel.

It’s fitting that Laraaji should be the face of the new age revival. For one, he exemplifies the genre’s potential. The only rule of new age is that the feelings it evokes have to be positive, and it’s hard to imagine any artist experimenting further within the confines of good-vibe music. Secondly, he’s immensely likable. With his white beard, deep chuckle, and mission to spread cheer, he’s practically Santa Claus. He even got Blues Control laughing on their collab album, which contains some of the most infectious and feel-good psychedelic music ever made.

Laraaji hasn’t made an album since the Blues Control joint, and the time is ripe. Hopefully, whatever he makes next will help bring some positive attention back to the much-maligned new age genre and bring his music to a new generation of new age-minded musicians.

Here’s a playlist of the best of Laraaji, as available on Spotify. The guy has dozens of albums out, but only a few are available to stream, as most were issued on tape; hopefully, more reissues are coming soon.