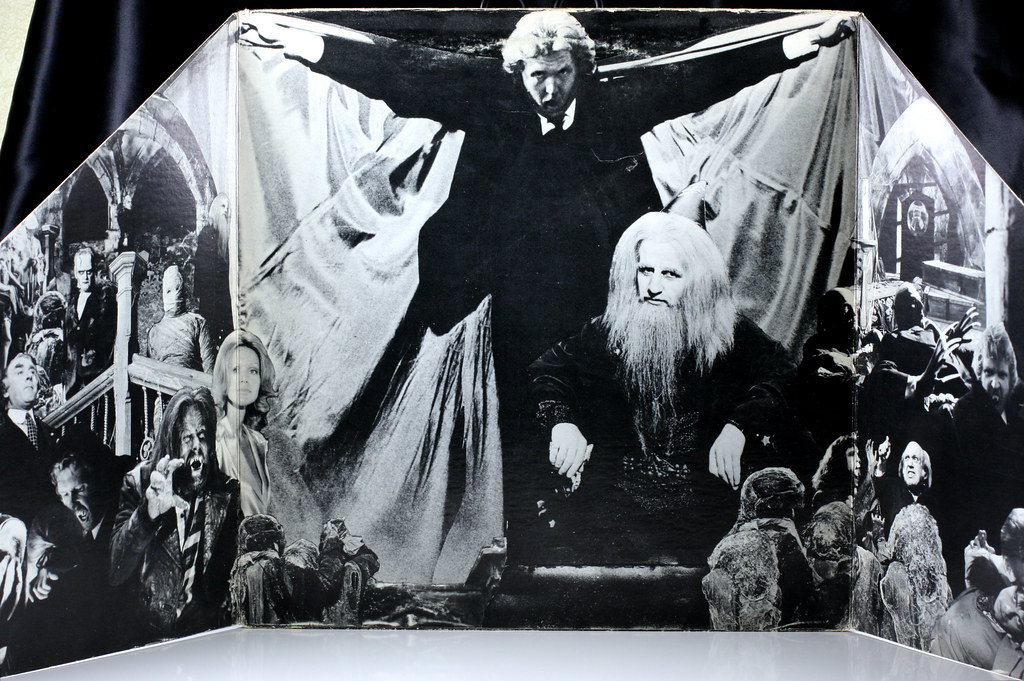 Pictured: Harry Nilsson in the 1974 musical Son of Dracula. That’s Nilsson doing the Dracula thing; to his right is Ringo Starr, as Merlin.

For several years now, I’ve been posting monthly roundups of the music I’ve been listening to to my Facebook account. I’ve had a few friends tell me they’ve found new music through these posts, and by posting them publicly on my site I hope to bring my new discoveries to a broader audience. This is a complete list of albums I listened to the first time this month.

A note for anyone coming here for scathing takedowns of terrible music: you will rarely see anything in the “Disliked” category, and if you do, it’ll be something I was assigned to review. If I don’t like an album, I usually turn it off, and this list only includes albums I listen to front-to-back.

Bill Callahan – Gold Record (2020)
Joshua Chuquimia Crampton – The Heart’s Wash (2020)
Sarah Davachi – Cantus, Descant (2020)
Sarah Davachi – Gathers (2020).
Harry Nilsson – Pussy Cats (1974). One of two albums on the list I found out about through Pitchfork‘s Sunday Reviews, which are so much more entertaining when they’re not about indie-rock sacred cows (Keyboard Fantasies is the other one). Pussy Cats is one of the most gloriously perverse albums I’ve ever heard. It’s half covers, like an album from the early sixties, and it’s just fantastic hearing songs like the dreamlike “Mt. Elga” transition into cocaine monstrosities like “are you ready to loop-a-loop-a-loop-a-loo?!?!?” (I thought of the Latin word “lupus,” and of a cartoon wolf with hearts in its eyes.) It’s so sure of its best moments (the two Spector-style covers) that it can get away with spending the rest of the time sabotaging them.

Bonnie “Prince” Billy – I See a Darkness (1999). I tried to get into Will Oldham this month and hit a wall. I saw him once at Hardly Strictly Bluegrass, where he had his hand down his overalls the whole time, and gave Viva Last Blues a shot a few years back when I was in a mind-state less sympathetic to bad singing than I find myself in now after going through a country phase last year. I see its merits more clearly now but am not yet sold. I might have to wait until I visit Oregon again to put these in proper context.
The Crickets – The “Chirping” Crickets (1957)
Gus Dapperton – Where Polly People Go To Read (2019)
D.Å.R.F.D.H.S. – Förintelsen & Döden (2014)
Beverly Glenn-Copeland – Keyboard Fantasies (1986)
Jyoti – Mama, You Can Bet! (2020)
Laraaji – Moon Piano (2020)
Mouse on Mars – Iaora Tahiti (1995)
Mouse on Mars – Instrumentals (2000)
Harry Nilsson – A Little Touch of Schmilsson in the Night (1973). Not mindblowing enough to make it into a higher tier–the word “whoopee” is still mostly what I remember–but an album I’ll cherish, not least because it calms me down after work.
Harry Nilsson – Nilsson Schmilsson (1971). I tried to start this one a few times in college and never finished it. “The Moonbeam Song” is uncommonly beautiful, but a lot of the songs are over-familiar by now. I understand why people call it a great album, but I just felt like I was listening to a great album, not like I was connecting with it.
Nirvana – Incesticide (1992)
Palace Brothers – There Is No-One What Will Take Care of You (1993)
Iggy Pop – The Idiot (1977).
Ricky Reed – The Room (2020) feature on Ricky Reed
Ana Roxanne – ~~~ (2019)
Smog – A River Ain’t Too Much to Love (2005). I’ve heard a few people say this is their favorite Bill Callahan album, but I didn’t get it. I think it has to do with the lyrics, which I have a hard time grabbing onto if the music doesn’t lift them up. Bill’s early work might just be too heterosexual for me: I can understand being married to the world, not breaking horses so much.
SVLBRD – Inland (2020)

Hen Ogledd – Free Humans (2020) – review. I like a lot of the ideas on this album, hence the relatively high rating compared to its placement here, but I found it very, very difficult to listen to, not because it’s nerve-wracking or intense but because it’s 79 minutes of trebly, amateurishly played pop music. If that sounds up your alley, give it a try.
David Toop – Apparition Paintings (2020)