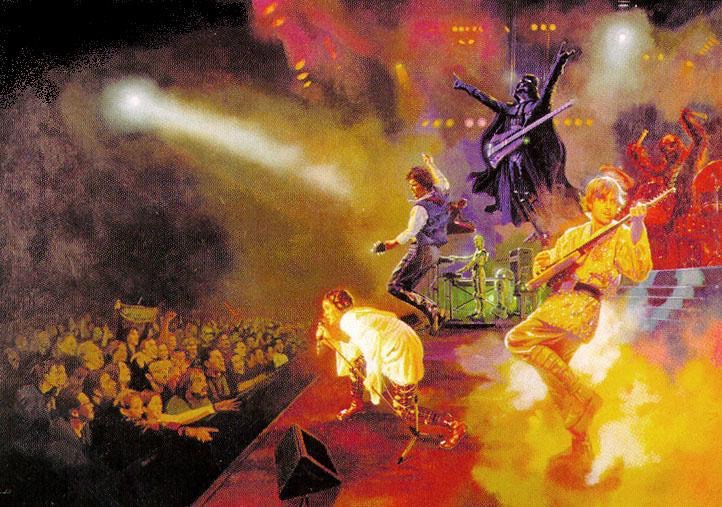 One of my roommates got this great poster for our living room, and it’s given me a lot to think about.

1. The placement of the band members is pretty much perfect. Han’s gotta be the lead guitarist, and every rock band needs a big, tall, strong, silent bassist like Vader. Luke, as the hero-but-not-hero of the movie, is perfect as the overcompensating rhythm guitarist. Leia is the singer, which maybe has something to do with the stereotype that women don’t/can’t play instruments, but then again everyone else fits their instruments so well that I’m not too mad.

2.I have no doubt Chewbacca would be a great drummer, but I’d be interested to see how he’d be as the singer. Would your typical intergalactic rock fan be able to understand him as well as Han can?

3. Where did the animal-as-drummer trope start, anyway? Keith Moon? Dr. Teeth and the Electric Mayhem?

4. Given the canon relationship of the characters to each other, I’m imagining some pretty awkward situations on the road. Here’s a band consisting of a brother and sister, their dad, the sister’s boyfriend, and the boyfriend’s best friend. This is essentially a family band, Partridge Family-style. Do they party together? Do Luke, Darth, and Chewie have to listen to their respective sister/daughter/best friend having sex at every hotel they stay at on tour?

5. Given that Star Wars and the kind of mega-arena rawk concert shown on the poster both epitomize the late-‘70s/early-‘80s zeitgeist, I imagine the Star Wars Family Band would play big, ELO-style stadium AOR, no doubt with some kind of high-minded sci-fi concept. But the other day I was staring at the poster while dancing around to “The Rain (Supa Dupa Fly),” and I couldn’t help but think how rad it would be if the music they made sounded like Missy Elliott.

6. In this alternate universe, would the inclusion of droids in a rock band be frowned upon, in the same way rock today is still scared of Auto-Tune and electronics? If C-3PO is fluent in six million forms of communication, imagine what he could do to a Moog or a Buchla. Seems a bit like cheating, but then again if you have a mega-music-droid on your hands, why not use him?

7. I’m interested if the band members have any solo projects. I’ve seen Takeshi from Boris rock a similar bass to Darth’s, so the Dark Lord of the Sith could probably make some pretty good drone doom on their own. And imagine if C-3PO and R2-D2 linked up as a Daft Punk-style duo to conquer the galaxy. Luke probably just writes Chili Peppers-sounding songs while hungover.

8. I noticed Greedo in the audience and couldn’t help but think Han wouldn’t have any fewer shady business dealings as a rock musician than as a smuggler. God knows the music industry on Earth is sketchy enough. Does Jabba the Hutt manage rock stars?